15 replies to this topic

When tiny European studio Serious Parody said it wanted to show me its upcoming PSN-exclusive title 5 Star Wrestling, I wasn’t sure what to expect. Would this be a realistic wrestling game, or would it be one that prides itself on over-the-top, WWE-like antics? Well, the answer is certainly the latter, because the 15-man team at Serious Parody has put together a game very much designed to catch the attention of wrestling fans that are into the show of it all, just as much as they’re into the technical aspects of the sport. 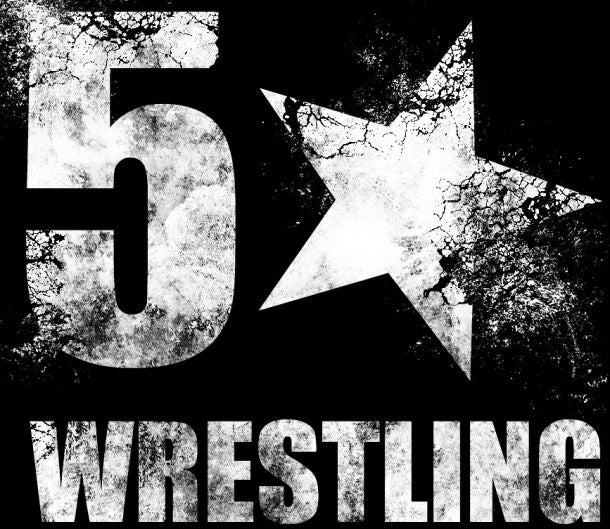 5 Star Wrestling isn’t a retail game, so there’s obviously going to be a smaller budget behind it. That’s very much obvious when you take a look at some of the game’s screenshots; it’s most assuredly not up to snuff on a graphical level with what Yuke’s has traditionally put out. But it’s what’s underneath 5 Star Wrestling’s hood that’s supposed to be its most appealing aspect. It stresses a more realistic approach, which is interesting considering the wrestling it’s emulating is... well... fake.

But fakeness aside, Serious Parody wants to play-up the idea of Ring Psychology in their game – the notion that gamers will become invested in the stories being told beyond mere combat – and there may be a method to the studio’s madness. It intends to release a constant slew of DLC once the game is released that will keep its fictional storylines moving. The hope is that players may become enamored by not only the gameplay, but the ever-moving plot. Some of the DLC will be free, to boot. 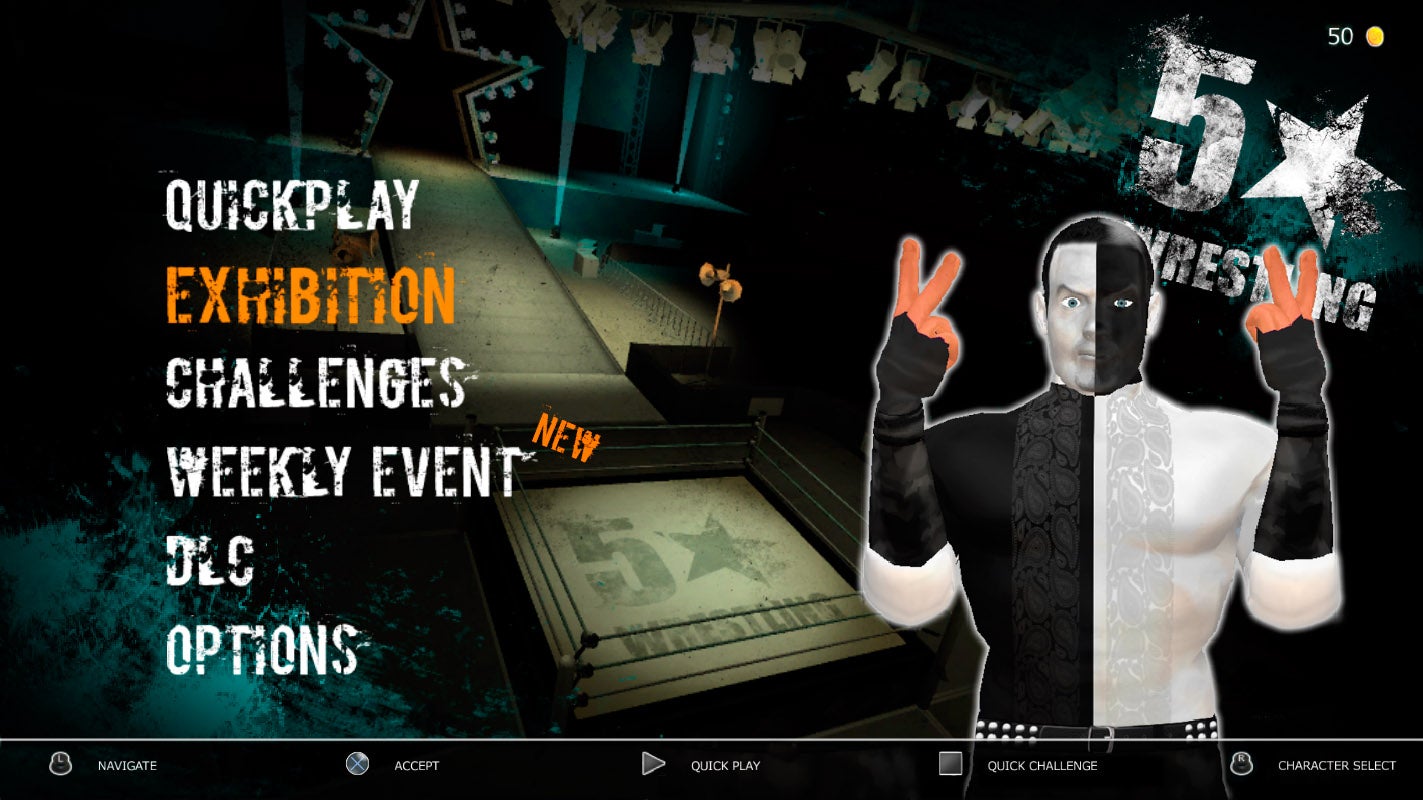 But there are also core mechanics the studio hopes to stress. Wrestlers are designed to react realistically. There will be limb damage and differing arrays of moves depending on if the wrestler in question is fresh or tired. Each of the game’s initial eight characters will have totally unique movesets – including a host of finishers – and because of the fact that Serious Parody can’t take advantage of real league or individual wrestler licenses, you may see some similarities between your favorite wrestlers and 5 Star Wrestling’s roster.

In terms of how you may move your way through the game, and moreover how it aims to keep you occupied, Serious Parody is trying to shove as much into its maiden PSN game as possible. There will be exhibition matches, of course, but there will also be a Challenge Mode catered towards each character, as well as Match Breakdowns that tear apart previous matches and let you know how you played. There will even be some in-game currency that will allow for unlockables and other items to be purchased. However, while 5 Star Wrestling supports local multiplayer, it won’t support online multiplayer. This is something that may be difficult to do on the technical side, but still something that should be considered for a game like this, especially if it aims to build a community. 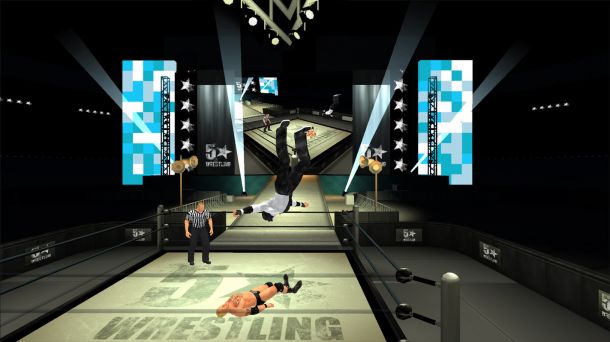 Serious Parody tells me that its game will launch later in 2013, and that they’re aiming to charge between £15-£20 (or $22-$30). That’s going to be a big ask on a downloadable service that has put a more recent emphasis on making things as cheap as possible. Then again, 5 Star Wrestling does seem to straddle the line – at least in feature-sets – between downloadable and retail. What’s clear is that Serious Parody, the studio behind iOS’ Wrestling Manager, loves the sport, and we’ll be interested to see what the final product looks like later this year.

Even if it was on Xbox I wouldn't of bought it. If WWE can't make a good game with full licensing, I doubt these guys will be able too.

Heard there is no online.

Heard there is no online.

Oh, if the gameplay looks good, that'll be a factor in me buying it.

I'll wait until I get some reviews from people who have brought it because it's not jumping out as a must buy right now to be honest.

Local Mulitplayer, but not online multiplayer.

I'm sorry but I honestly don't see your friend coming over to your house saying, "Dude, let's play 5 Star Wrestling." Hardly any one likes wrestling much and it's a downloadable game. Just doesn't match up somehow.

What do I even put here? I see this game as being narrow mindedly overlooked, thus therefore making it an under-rated game that people will prejudge and then a year or two from now those same people will be like "that game is good & under-rated" when in reality it should have just been given a chance to begin with......but, as is the mind set of today's society.....the game will be prejudged before it's released & "reviewed" with clouded judgment & therefore not given the full attention that more n likely it will deserve.

I see this game as being narrow mindedly overlooked, thus therefore making it an under-rated game that people will prejudge and then a year or two from now those same people will be like "that game is good & under-rated" when in reality it should have just been given a chance to begin with......but, as is the mind set of today's society.....the game will be prejudged before it's released & "reviewed" with clouded judgment & therefore not given the full attention that more n likely it will deserve.

Same thing with Fire Pro Wrestling Returns, except for the hardcore fans that already know of this game.. The majority of the new audience snubbed the hell out of it because it was in 2d and didn't have the deep caw mode of the SVR series. That pissed myself and the hardcore FPR players off the AI alone trupmes the SVR series in a whole.

Sadly you are right this will probably be best release of year but will get swept under the rug very fast.

I rather give guys likes these & MDickie Money, than giving it Yukes & Vince.

Both of the guys above make fantastic points that I agree with. Im sick of wrestling games, I hardly even play games at all anymore, but Fire Pro Wrestling is something that I can still turn on this very day and be stimulated by. Insanely underrated game and people are nothing less than god damn idiots for thinking "ITS IN 2D SO THAT MEANS IT SUCKS".

Ive heard a bit about this game but Ive yet to judge it. I will be judging it on gameplay if I try it.

The Jeff Animations look so good, just like it would hurt, not like in Yukes Crap we have nowadays.

I really hope they work more on making the moves look good, the game could be epic then.

Back to 5 Star Wrestling