54 replies to this topic 2K Sports today revealed the complete track list for NBA® 2K14, the next installment of the top-selling and top-rated NBA video game simulation franchise*. Personally selected by the game’s cover athlete and two-time NBA Champion, LeBron James, the soundtrack boasts an eclectic mix of hip-hop, rock, and classic pop that is sure to get players ready for tip-off. Fans who want to listen to the soundtrack in advance of the game’s release on October 1st can stream the complete list on the NBA 2K14 Spotify page.

"2K is letting me take control of some important elements in NBA 2K14, including this year's soundtrack," said James, who successfully defended the Miami Heat's world championship in the NBA Finals, while winning his second straight NBA Finals MVP award. "I love that I'm the first NBA 2K cover athlete to choose the soundtrack."

Glad he got that Kendrick Lamar in! And I might rent it for the PS3 since I'm most likely getting the PS4 this year and I'm gonna get NBA Live and 2K14 for it.

Wow that next gen video looks tight. I'm so excited for next gen. I don't even play NBA I really want to pre-order this because of the bonus stuff that comes with it, but I'm not sure if I should because I'd like the next gen edition. I have no idea when I'm getting the Xbox One either.

The game looks dope though.

NBA 2k13 was my first and it was awesome, NBA 2k14 soundtrack looks sweet with Nas and Imagine Dragons.

The NBA® 2K14 development team has been busy this Summer working to deliver on the promise of greatness that fans have come to expect for not one, but two, different generations of consoles.  Today 2K is releasing a high-flying feature list along with highlights of several core gameplay improvements coming to NBA 2K14 on current generation platforms. With LeBron James, the king of basketball, at the helm, 2K is continuing to strive for greatness and NBA 2K14 will once again be second to none.

Below is a preview of some of the new features and core gameplay improvements fans will experience in NBA 2K14 with current generation platforms (Xbox 360, PS3) and PC, available on October 1, 2013.

This is a must have. Just like it is every year

! I hope the WWE 2K Series can get as good or as well acclaimed as the NBA 2K Series has become.

I'll admit that it's difficult to get excited about the current-generation version of NBA 2K14 when the Xbox One and PlayStation 4 editions are looming just a month or so after the Xbox 360 and PlayStation 3 versions ship on October 1. But then I only have to remind myself that this is a phenomenal hoops series for many years now -- and it's only gotten better.

Of course, it helps that the 2K team handed me the controller and said, "Go ahead, just play." 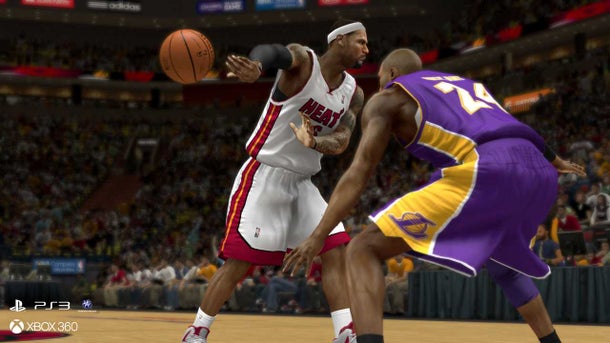 Current-gen 2K14's big new addition is dribble controls. Various inputs on the right thumbstick will allow you to pull off dribble moves or shots. Like an idiot I immediately tried to figure it out on my own without heeding any instructions, and ended up throwing wild passes. It turns out that holding LT (on Xbox 360) now triggers an assist pass based on whatever direction you nudge on the right stick. It's wild fun on fast breaks or for driving the lane and kicking out to a spot-up shooter behind the three-point line.

Once I got some advice from longtime series director Rob Jones, the dribble-stick controls made a lot more sense. As he simply stated, "Dribbles are taps [on the right thumbstick], shots are holds."

Soon I was feeling locked-in and, playing the Heat, able to do some very LeBron-like things both at the rim and out on the perimeter. 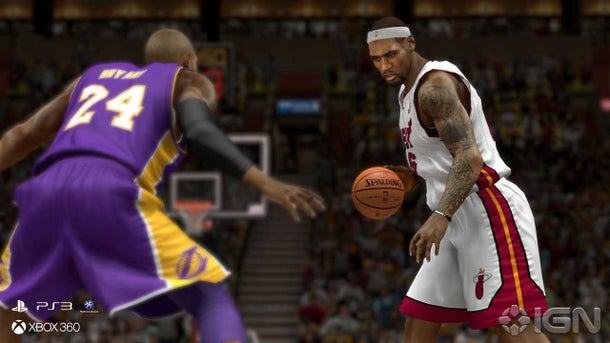 "We started dabbling with [the dribble stick] during development on 2K13," Jones said. "It was one of our proposed control schemes coming out of that year."

Otherwise, online Crews are back, along with the new inclusion of 14 Euroleague teams.

Current-gen NBA 2K14 seems to be a pretty safe bet this year. As for next-gen? We'll have the first info and footage for you as soon as humanly possible. Stay tuned. It looks like we will have customizable wristbands in NBA 2K14, for those of you interested in that sort of thing. You can see "I Promise" on LeBron's wristband in a recently released screenshot. InsideGamer has posted their NBA 2K14 hands-on impressions from GamesCom. You can read the translation here. They have also posted information on the Path to Greatness, MyPlayer and MyTeam.

NBA 2K14 Producer Erick Boenisch (AKA SimBaller), has confirmed classic teams will return to NBA 2K14 (post #200). More details will be revealed at a later date. Some of you may have already been aware of the news, but for those that were not, you can calm down.

they finally have European basketball! this game will be good for sure

Looks good. Don't know why people are complaining it's the same thing. If it ain't broke, don't fix it.

The demo of the current gen version of NBA 2K14 I played at gamescom feels and plays a lot like last year’s game with a couple of refinements and tweaks that hardcore fans will definitely appreciate. I was expecting something similar to 2K13 due to the next gen release but honestly I was a bit disappointed to see almost the exact same presentation even down to the same camera angles before tip off.

After a couple of games you do see the gameplay improvements shine through a bit more.

The most noticeable change to this year’s game and probably a real game changer is the new blocking system. Not only do you get to see awesome block animations, the feel and reward of playing defense is much higher than last year. On one possession, I played great defense against Tim Duncan and the San Antonio Spurs until the end of the shot clock, at which point I blocked his shot because he couldn't get a good one off. You really feel the presence of good shot blockers around the rim this year. Great addition.

Defense on the whole felt a lot stronger as offensive players tend to lose the ball when going into traffic and a lot of contact animations are triggered around the rim. Defense movement seemed improved as well – all in all I really liked playing defense, it was a lot more fun than in last year’s games.

On offense there are some great improvements as well. Passing animations and speed are noticeably improved plus the addition of the stick as a passing trigger felt great too. Shooting is a lot more responsive as well – unfortunately there are still those very quick release points where you don’t have the opportunity to really hang in the air while shooting. Shot releases did feel disconnected again for me which was very disappointing to see.

Another thing I didn’t see a lot of improvements in was the floor spacing. You can tell that they were trying to address the issue (which has plagued the series for years) and the faster passes and jump shots did help a bit – but the main problem with help defense being too one-dimensional and defensive recovery being too quick still exists. Also the teammate AI doesn’t space the floor well enough when penetrating. On one occasion I had Parker of the spurs on Chris Bosh in the post & paint and no Spurs player came to help.

Hope they can fix this issue in the next gen versions.

The new Pro Stick needs a little getting used to at first. I had some instances where I wanted to dribble but went up for the shot. Overall I liked this setting more than holding down LT for a shot or drive. There are a couple of nice new dribbling animations as well.

There were other positive aspects as well. Biting on pump fakes can cause very realistic looking animations where players fall over each other. Contact animations in the paint seemed more varied but you can´t really tell how good or varied they are from playing only a couple of games. I did see some familiar contact drive animations from 2K13 a little too much. I saw a one handed dunk by Lennard on Haslem which looked almost exactly like the one in he NBA finals against Miller. I had the feeling that dunks were a little bit more explosive as well. Playing the Euroleague teams feels a little different as a result of different defensive schemes.

Overall I liked the improvements a lot after playing for a while but was disappointed to see some issues I had with the last couple of games still existed (jump shots & spacing). This is the year of the first next gen version of NBA 2K so I can understand that the wheel won´t be reinvented with the last big current gen effort. NBA 2K14 will may very well be the best version of NBA 2K to date – just don´t expect a  very different game.

No new signature skills yet. Eventually.

Back to Sports & Racing Games

Also tagged with one or more of these keywords: NBA