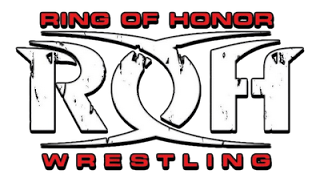 You do understand that ROH has turned into a company that cuts quite a bit of promos?

You do understand that ROH has turned into a company that cuts quite a bit of promos?

I just want this one to be flat out EWR. Hang in there EdgeHead. I know you'll like this.

The Match: Rude Awakening neckbreaker on Michael Elgin by Rhino. Remember when that was a legit finish? Massive backbreaker on Elgin and I get happy flashbacks to Bret Hart's Five Moves of DOOM. There's a two count on the pin. Rhino gets taken down out of nowhere! STIFF~! chop lights up Rhino who covers up to try and stop the agonizing PAIN! Running knee lift from Michael Elgin. Hooks the leg for a two count. Michael Elgin scores with a standing spinebuster. Hooks the leg! ONE...TWO...NO! BAAACK Body drop by Rhino gets a bit of a pop from the crowd. Elgin drops an elbow...but Rhino moves out of the way. Nice piledriver on Elgin. Covers for a quick two count. High Angle DDT by Rhino just SPIKES Michael Elgin down! Pinfall attempt: ONE...TWO...NO! I would have bought that as the finish! Bodyslam by Rhino. STIFF~! chop lights up Elgin who covers up to try and stop the agonizing PAIN! Rhino charges into the corner but EATS BOOT. Flying shoulder tackle by Elgin sends Rhino CRASHING to the mat. Michael Elgin scores with a big spinebuster. Michael Elgin moves in for the kill. Revolution Elgin Bomb!!! That shook the ring. 1....2....3!!

Match Background: Adam Cole has been feuding with Matt Hardy recently, who is a stable mate of Compton in S.C.U.M..

The Match: Flying shoulder tackle by Compton sends Adam Cole CRASHING to the mat. Full nelson slam on Adam Cole. Covers for a quick two count. Cliff Compton misses a big legdrop after stalling too long. Back suplex on Compton. Adam Cole snap suplexes Compton HARD to the canvas! And again! A pair of clotheslines follow and...yep, Adam Cole is a HOUSE...EN...FUEGO~! Covers for a quick two count. Delayed BRAINBUSTAH~! by Adam Cole who held onto that one for ages. Hooks the leg! ONE...TWO...NO! A Gut buster connects on Compton and hits hard. Compton counters a backdrop attempt with a kick to the face and hit a clothesline! Compton hits a piledriver on Adam Cole. That used to end matches, you know. Covers for a quick two count. High Angle DDT by Cliff Compton just SPIKES Adam Cole down! Pinfall attempt: ONE...TWO...NO! Cliff Compton with a spinning neckbreaker on Adam Cole. Trying to channel the spirit of Misawa, Cliff Compton ends up chanelling Lex Luger instead and nails a running forearm to the face, minus the steel plate, of course. Adam Cole reverses a hip toss. Compton tastes a high angle back suplex. If Spike Lee can sue TNN over the Spike TV nonsense, then Kurt Angle should be able to sue SOMEONE for that. Front legsweep slam aka The Stroke by Adam Cole. Cliff Compton is in trouble. Here it comes - Florida Key. 1....2...3, it's finished.

American Wolves vs The Briscoe Brothers.

Match Background: The Briscoe Brothers are one of the most experienced teams in the promotion.

The Match: Double arm suplex by Eddie Edwards connects as M. Briscoe hits hard. Die Hard uses a basement dropkick to the knee and it looks like it might be TIME TO GO TO SCHOOL~! Covers for a quick two count. Tag to Davey Richards. American Wolves whip M. Briscoe into the ropes and hit a double back elbow. Hooks the leg for a two count. M. Briscoe gets caught with a short powerbomb from Richards. Mark Briscoe comes up with a right hand out of nowhere. Spinebuster by Mark Briscoe. There's a two count on the pin. M. Briscoe tags out to Jay Briscoe. J. Briscoe hits a piledriver on Davey Richards. That used to end matches, you know. Pinfall attempt: ONE...TWO...NO! I would have bought that as the finish! J. Briscoe slams Davey Richards down and motions to the crowd. Davey Richards once again takes the advantage after blocking a few punches and connecting with some forearms. Running knee lift from Davey Richards. Tag to Eddie Edwards. Jay Briscoe just WALKS into a stiff lariat clothesline from Die Hard. Tag to Mark Briscoe. THERE IT IS! A legdrop to the BACK OF THE HEAD! I swear, that makes any match just a little bit better. I don't mind telling you that every time I see it, that's for sure. Mark Briscoe is in big trouble...Superkick/German Suplex!! 1....2....3! American Wolves are making their way back down the aisle...but get jumped by Corino \ Matt Hardy! Eddie Edwards gets dropped throat-first onto the guard rail, and then Richards is double suplexed on the entrance ramp! Corino \ Matt Hardy storm the ring...and attack The Briscoe Brothers as well! J. Briscoe gets wiped out with the Super Bomb! Mark Briscoe doesn't fair any better, and gets beaten to the floor with punches and kicks. Corino \ Matt Hardy have destroyed both teams!

Back to Be The Booker