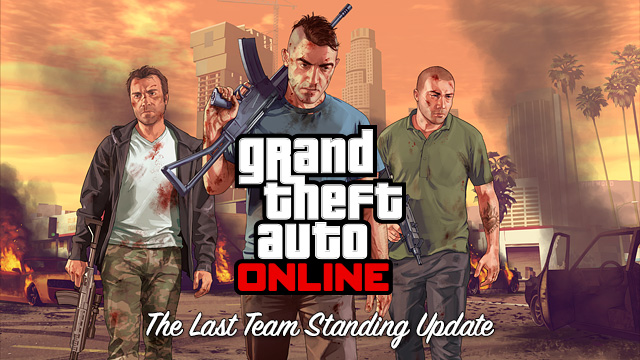 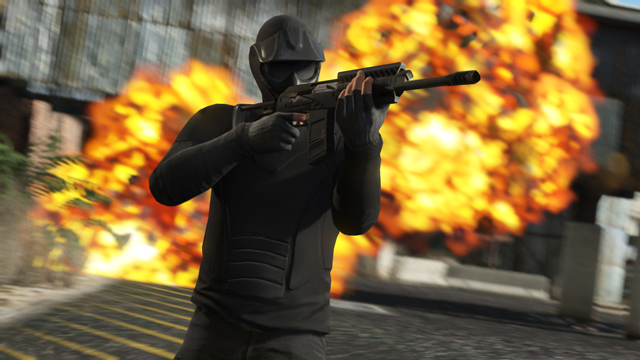 Take enemies down with brutal force when you equip the new Heavy Shotgun.

Visit Ammu-nation to expand your arsenal with a pair of potent new firearms: the Heavy Shotgun delivers serious stopping power in close quarters, and the Marksman Rifle can drop targets from long range with lethal accuracy. Plus, suit up your team with new Outfits, along with new Masks, Tops, Pants, Bulletproof Helmets and more.

Rule the road with two new Motorcycles – the Shitzu Hakuchou sport bike and the LCC Innovation chopper. Or, for those with more sophisticated tastes, show off your elite style in the fiery Lampadati Furore GT. 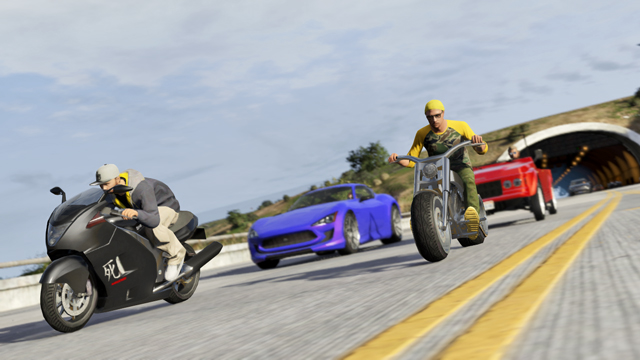 The Hakuchou and Innovation lead the Furore GT here on the Great Ocean Highway.

This update also presents the launch of the Last Team Standing Creator Mode. You can now design original GTA Online Jobs in this strategic and deadly mode that pits teams against one another with no second chances. This Creator update features a new option for building even more dynamic matches across other modes – with the ability to add Rounds to Captures and Last Team Standing Jobs. Or raise the stakes by adding rounds to Rockstar Created LTS, Captures and Versus Missions. And be sure to take advantage of the new Forced Weapon setting, allowing you to limit weapons for specific options like “Snipers-Only”. 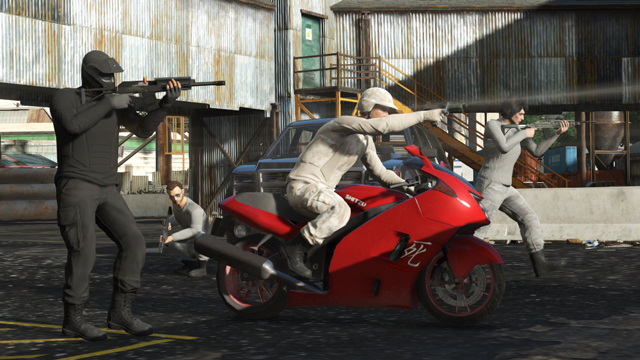 All new tactical gear including bullet proof helmets are now available in shops.

Also part of today’s automatic update, we’ve now globally synchronized the Job voting screens, allowing us to merge sessions where players have voted on the same Job. This, combined with the on-call matchmaking introduced in a previous update allows players to find the Jobs they like more easily, and to stay with as many like-minded players as possible. There are lots of additional changes and tweaks to GTA Online, all listed out in detail at the Rockstar Support site. These include the ability to now go on-call for activities like Arm-Wrestling, Darts or Golf or to quick match with your friends for those activities using the option in your phone, as well as an increase in the maximum bet limit from GTA$2,500 to GTA$10,000.

To download today's update, just switch on your online-connected PS3 or Xbox 360 and start GTAV. From there, you'll be prompted to download the automatic update (1.17).

Alta (Rank 16, 2-8 Players)
Less violent than the average apartment building residents' committee meeting, this cramped LTS pits two wings of a building against each other. Try to stay on the rooftops, and look for long-ranged attacks across the courtyard and close-quarters clashes on the footbridge.

Del Perro Freeway (Rank 23, 2-16 Players)
Draw a line in the sand with this Del Perro Beach LTS. Teams start at either end of the beachfront houses. They can go at each other directly or take the pedestrian bridges across the WH to pick up weapons. Dr. Friedlander isn't running his conflict resolution seminar this week.

Grand Banks (Rank 9, 3-12 Players)
As good a place as any to make a stand, three groups take the third way at the Grand Banks Steel foundry. Fight on the rooftops, in the tunnels, and along the gangways to be the only team that doesn't get to fulfil their death wish.

Hawick (Rank 16, 2-16 Players)
Two teams snipe each other from rooftops or get down and dirty in the alleys with shotguns until there's only one of them left. Hawick hasn't seen this many unfortunate accidents since speedballs were cool in the 80s.

Mount Josiah (Rank 29, 2-16 players)
When the dust settles, and the rivers stop running with blood, who'll be left on top of the second highest mountain in Southern San Andreas? Two teams fight to be king of the hill on the open, almost coverless slopes of Mount Josiah.

N.O.O.S.E. (Rank 9, 2-8 Players)
Something's happening behind the mysterious chain link fences, and non-descript 'government facility' signs off the Palomino Freeway. Two teams have taken time off from spying on personal communications to fight for supremacy on the rooftops, walkways, and parking lots of the N.O.O.S.E. facility. Look up for the best weapons.

Paleto Bay - Tanks (Rank 29, 2-16 Players)
Some places get all the luck. Two teams face off with tanks and explosives and don't mind if they turn the whole town to rubble. Who'll be left standing in what's left of Paleto Bay?

Skyscraper (Rank 36, 2-16 Players)
There's no escape from Los Santos. One team tries to hold out at the top of a skyscraper construction site armed only with sniper rifles and heavy weapons. The other team launches a four pronged assault in Buzzard attack helicopters.

Storm Drain (Rank 23, 2-16 Players)
Gang warfare's gotten really out of hand as two teams come at each other with tanks, motorbikes, and explosives in the concrete channel of the LS River. Try to stay in the storm drain, and don't worry about flash flooding, there's a drought in San Andreas after all.

Tataviam Truckstop (Rank 16, 2-8 Players)
Lonely truckers and enterprising hitchhikers are in for a scare as this pit stop on the Palomino sees its share of the action. Small scale LTS that'll make good use of the Heavy Shotgun.

Awesome! Look at the graphics

Where's the Heists tho? Its been a year..

I know how to wear it lol

Where's the Heists tho? Its been a year..

I know what you mean. I'm liking all the free DLC packs we've gotten, but heists were something they billed even before the game released and yet we still have zip without any clear indication from them as to why.