580 replies to this topic Patricia Anne Stratigias, also known as Trish Stratus, is a former valet and wrestler for World Wrestling Entertainment (WWE). Before her start with the WWE, she studied at York University in Toronto, Canada. There she majored in both Biology and Kinesiology with plans of becoming a doctor. While attending York University, the professors went on strike, and she worked as a receptionist at a local gym where she was soon discovered by an agent who then signed her to become a fitness model.

Her success as a fitness model led to many public appearances including one with Live Audio Wrestling (LAW) where she expressed her interest to get involved with professional wrestling. Soon this caught the attention of several WWE talent officials who approached the young beauty by sending her a letter offering her a contract to sign with the WWE. At that time she had also received offers from numerous rival wrestling promotions, including World Championship Wrestling (WCW) and Extreme Championship Wrestling (ECW), however, she turned them down and eventually signed with the WWE. On March 19, 2000 on Sunday Night Heat, she made her official WWE debut when she formed the tag team stable of T & A with Test and Albert. She then became the valet of then WWE Intercontinental Champion, Val Venis.

Afterward, she was involved in a brief affair with WWE owner Vince McMahon which sparked an intense confrontation between her and his daughter Stephanie McMahon. The bitter feud lasted until Wrestlemania 17 where she slapped Vince McMahon and screwed him out of a match against his son Shane McMahon in a Street Fight with Linda McMahon in his corner. Soon she became a fixture in the women's division, as she began to dedicate her time in the gym and improve on her wrestling abilities. Ultimately, this led to her capturing her first WWE Women's Championship on November 18, 2001 at Survivor Series. She has also certified herself as a bona fide WWE Diva by being voted Internet Babe of the Year in 2001, 2002, and 2003. She then earned the highest honor by winning the "Diva of the Decade" award for the WWE Raw 10th Anniversary Special.

Trish Stratus continued to be an asset on WWE Raw for several years by getting herself involved in major story lines with several WWE wrestlers. Finally, on September 17, 2006 at Unforgiven in her hometown of Toronto, Canada, she made a storybook ending when she captured her seventh WWE Women's Championship. This also marked her early retirement from professional wrestling after seven years with the business as she went on to pursue other interests. Trish Stratus is currently making her mark on the entertainment industry and to the rest of the world, she is an international icon.

Who didn't love Trish in her prime?! Add me in of course!

Who didn't love Trish in her prime?! Add me in of course! Not really a guy that joins fan clubs. But Trish is definitely the hottest diva of all time!

Not really a guy that joins fan clubs. But Trish is definitely the hottest diva of all time!

Amen to that brother.

I also remember when I was a young kid playing Smackdown! 2 Know your Role on PS1 and was waiting for the Trish loading screen to pop up. I would keep my mouth open for the entire time lol. 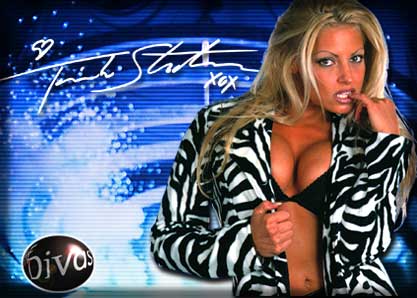 I thought I was the only one xD. That was what really brought my attention to her actually.

Yeah! My boy Dozer is in.

Count me in as well.

Count me in as well.

Oh yeah; I really had to twist my arm before asking to be added to a list glorifying Trish Stratus.

Yeah; I couldn't even ask that with a straight face.

Oh yeah; I really had to twist my arm before asking to be added to a list glorifying Trish Stratus.

Yeah; I couldn't even ask that with a straight face.

You can put me at the top

You can put me at the top

I got 1st dibbs on her xD