Most Horrible Wrestling Game Ever

104 replies to this topic

One horrible wrestling game, coming up! 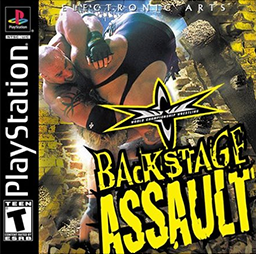 Yeah that was awefull.

Wrestlemania X-8. And all the Smackdown VS Raw games. Granted, I have put them in and played it over and over but that's only because I was making videos with them.

WMx-8 was the first Gamecube WWE Game,
not as good as No Mercy, but it had Tables.
I really liked it back then, too =/

if TNA iMPACT was bad on ps2, imagine it on the Wii -_-, it didnt even have created character, you had to use Suicide for story mode and the controls were horrid. WORST. GAME. EVER.

TNA Impact sucks! I sometimes regret that i wasted money on it!

After reading your comments. I'll share with you my list of the worst wrestling games I've ever played; Smackdown! Just Bring It, Smackdown! vs RAW 2008, and last but not least--Smackdown! vs RAW 2011. It enraged me, it was the worst online experience I've ever had. The bugs/glitches/desynching/450 plus removed moves/online lag/etc ruined the game along with countless other complaints. It was my first [wrestling] game I've ever stepped into online gaming, I stopped playing SVR11 about two weeks after it released. I personally addressed so many of SDH's complaints along with my own here at the forums. Less than (6) six months later, THQ gave us (4) four surveys and we used it to SPEAK UP! WWE '12 should be proof of what the community can do once we band together! There's more work to be done, but nothing is to be taken forgranted. WWE '12 marks the (13th) game in the series. We should never be forgotten. The fans are #1. Period. Thank you! We have a VOICE.

Just Bring It is a Classic oO
I loved the Backstage Areas, and the whole Setting. Okey it ate like 5mb on our Mem Cards but well... ^^

^^^I'll say this much about Smackdown! JBI--it had loads of backstage areas, no crotch/chest blur for males/females, and you could pick up virtually any weapon to fight with. You could fight in Royal Rumble matches of up to (8) eight men, and...that's all most I can say positively right now LOL. The rest isn't worth discussing much, and since you mentioned it, 5MB of memory! Holy *&@!

TNA iMPACT should have NEVER been made

I agree, I think the only reason to make the game was to bring Suicide out of the game into the actual show.

Yeah thats my answer TNAs game. I never include TNA in any of my discussion because im not a fan but i did play it because of Suicide.

I played it because of AJ Styles, but it wasnt all that bad to me, I just felt as though that they needed more matches and more weapons and they would've been ok for their first game.

I played it because of AJ Styles, but it wasnt all that bad to me, I just felt as though that they needed more matches and more weapons and they would've been ok for their first game.

They really need to at least put out some game yearly like THQ. The whole thing was confusing how to do moves, how the game works, i cant even kick out of a pin. It basically was a spam fest for me to win.

I remember when I first got the game for Wii(first mistake) I was all happy, because it was TNA's first game(second mistake) and my favorite person was AJ Styles back when I used to watch it. Maybe it was just because I had it on Wii and it was mainly for PS3/360, but I found it horrid, I don't play too many Arcade games because people love to button mash and I don't know how to do anything. Then, my cousin always annoyed me by always picking AJ cause he knew I loved using him(if Christian werent in the game I would thrown it out the window instead of sold it

) and Christian was my backup. Then the story mode sucked because you had to use Suicide instead of all this hype on a created wrestler(which I hear sucked anyway). Worst thing though was that it didn't even have all the people, I remember seeing other people playing as Petey Williams(third favorite back then) and other people, so I just gave up on the game and sold it. THAT is why I hate TNA iMPACT

I'm so sorry. When a game fails, it hurts everyone.

I'm so sorry. When a game fails, it hurts everyone.

If I ever make a contact with TNA Wrestling game for PS3 (even for 5 euros) I wouldn't buy it.

I was younger, I thought it was gonna be kinda like SVR

WCW Mayhem was the worst for me, WCW seems to have put out a lot of games that I ended up hating lol

WCW Mayhem was the worst for me, WCW seems to have put out a lot of games that I ended up hating lol

Almost every WCW game made everyone who played it look ridiculous XD. J/K Back to Other Wrestling Games

2 user(s) are reading this topic