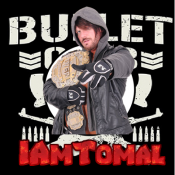 Hello everyone, I'm DragonAge and you have seemed to have stumbled upon my profile. So I guess I should tell you about myself.

I have been a wrestling fan for about 7 years now. When I first started getting into wrestling because my cousins were big fans of it, and they would tell me everything they knew about the subject. As a kid I would enjoy watching it with them, my favourite guy was Rey Mysterio. (I'm still technically a kid now, since I'm 12 years old. But whatever.)

As I grew up and started getting more and more interested and then eventually I started doing my own research. That's how I got into the Indy scene of wrestling. I'm currently a big fan of Daniel Bryan, Randy Orton, Finn Balor, Hideo Itami and Kevin Owens. I like watching these guys in the ring because of how interesting and diverse they are.

I've also recently started getting into TNA, ever since they moved to Destination America I've been trying to keep up with what's going on. I think they are doing good for themselves currently and it's actually interesting to watch. I'm a big fan of Sammuel Shaw, MVP, Kurt Angle, Austin Aires and Bobby Roode. I like to watch some of TNAs old shows (Like in 2006) and they had some really awesome moments.

Mason is badass, Woods is boss.

So yeah, that's pretty much it. I hope you enjoyed reading this and if you ever want to chat feel free to PM me! Bye!

In Topic: The Lost Art Of Selling

But... people still sell... Good, even. Yeah, there's a few sucky ones like Cena, Miz and then you have a few peeps in the indies and stuff who don't sell at all (at least they bump well) but overall... Nah, just not true. Like, I don't like discrediting a post that has so much effort (kudos for that) but just nah. Selling changed a bit to where you know often have these fighting spirit spots, but these aren't used all the time, so no problem there.

And the whole "Dropkicks were once a finisher!" is just nonsense. You still have basic ass moves as finishers. And you had basic ass moves as finishers AND regular moves back in the day as well. People simply don't buy into weak looking finishers (and they shouldn't) and that's totally fine. A lot of moves are used as both, finishers and standard moves, be it the Camel Clutch, Superkick, Big Boot, Clotheslines, DDTs and whatnot. I mean, finishing moves are generally a pretty retarded concept, but that's a whole different issue.


It's fine, I respect your opinion. Hopefully you will like tomorrow's blog better!

In Topic: The Lost Art Of Selling

The fact that they don´t sell the move, it makes me really to lose again interest in watching wrestling again. I agree, I watch only WWE, not even NXT, but only RAW and PPV´s. But if WWE wants to stay on top, they should´ve put more value on some old moves. For example, I never thought that dropkick was used as a finishing move. It is hard to do it? Yes sir! I did it before and I arrived almost on my chest if I couldn´t find someone to connect my legs with.

The fact that some wrestlers kick out from a powerful DDT makes me to blow my blood, and to say "that was phenomenal". Seriously, when you see that Dolph Ziggler was jumping in the entire ring after a DDT, and he still kicks out, even if you know that was fake, you still jump and scream like crazy for a best moment. But when people just fall down, almost not hitting the ground after the DDT, is just stupid to watch it more. Yeah, ok, concussions, and all those stuffs, but if you don´t want to have something like this, don´t even go in wrestling companyes, make yourself another life. When you step inside that ring, you must understand what you will have.


Thanks man! I very happy that you decided to take the time to write all that.

In Topic: The Greatest Hair in Wrestling?

I like Seth Rollins hair, also when Dolph Ziggler had the pink dye in his hair I thought it was cool.

In Topic: How do you change gameplay options in My Career?

I don't have the game but apparently you can't.

In Topic: Who is the best football manager ever?