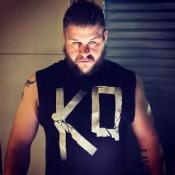 Rebel hasn't added any friends yet.

I sat in a cafe, more concerned about the guy sitting in front of me than my increasingly cold coffee. He had met with 4 operatives all mentioned in the case file I managed to swipe before leaving our base in Egypt. The man who hadn't eaten anything and finally ordered something with a note. The waiter delivered me a egg and sausage and the note. "Nice try" it read, I looked at the table and he was gone. I slammed the table, spilling the coffee. I grabbed the sandwich and took off trying to find him, it would've been relatively easy to spot a man in a custom tailored suit in Egypt, if he wasn't a trained operative that could dodge a tail, I scanned the surrounding area. "Back to square one," I thought until a hand yanked me away from the crowd, it was the man. He went for a punch but I dodged him and swept his legs. I quickly made if back to my feet and pulled out my pistol and trained it one him, "Who are you?" I gritted.

In Topic: Who was their biggest rival?

Ok I know we a tad late on the NBA season, after talking with Shamar I'm gonna be helping with the NBA part of this