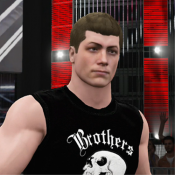 In Topic: How To Create Custom Title Belts & Side Plates In WWE 2K18!

Can you make an Orange one, Black one & White one?

Of a specific belt?

The New Day revive Halloween Havoc, only to face of against The Brothers Grimm, who has a shot at becoming the #1 Contenders for the WWE Tag Team Championship!

It's Street Fighter VS Double Dragon as Birdie Woods, Kofi Masters, and Big E. Honda face off against Anthony and Austin Elden dressed up as the Lee Brothers!

In Topic: Just Some CAWs I've Made For "Ring Of Horror"

The first Episode of Ring Of Horror is out!

In Topic: Just Some CAWs I've Made For "Ring Of Horror"

Thanks! Really liked the play on words with the federation name, although it has caused some mix-ups with people thinking it's "Ring Of Honor". XD

Glad that you like the CAWs too! Made 36 of them so far. 20 men and 16 women, to make up the entire Ring Of Horror roster!

A few updates! Finally finished both the Men and Women's Division of Ring of Horror, so just about ready to get the Universe started! As a prelude to it, did a special Halloween Royal Rumble with the entire men's roster. Also, check out the showcase of Freddy and Jason!

In Topic: Never Too Late To #PushSandow, Or Conquer As Aaron Rex!

Thanks! Glad you like it, and very happy with how he came out!