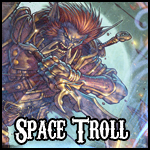 Yeah I noticed that in the WWE comic con video type of deal we get to see a glimpse of Brodus Clays and Laylas renders at 1:08 minute mark

So since the site is all new and stuff. I thought maybe I need a refreshing of some sort too. But since I'm useless at making sigs and avatars, I thought maybe you guys could do better and make me one

And this could be the sig.
http://www.deviantar...ell-d4nnxiu.jpg

On the avatar You can just add the name Space Troll on it and maybe so cool effects if ya feel like it. On the sig you can add Space troll on it too but you can also add the name Iorveth on it.

So thanks in advance and such.

So if everyone's blood pressure has lowered now after the craze of Lesnar returning. I'd like to hear everyone's thoughts on Tensai (also known as A train) debuting after weeks of video teasers.

-Were you impressed?
-Did you like his in ring work?
-What do you expect from him in the future?

I was personally very impressed by him. I've seen a few of his matches in Japan, the guy is REALLY good for a man of his size. He has really improved his story telling in the ring from his WWF days.

Sorry for being an arse

Yeah I kinda have noticed that I have lately acted kinda douchey (totally a word). and since I don't feel like to be the local ass of the forums (but I probably failed that a loooooooooong time ago) . So I'm saying sorry and I'll try to behave and stuff. I may or may not cuss still but I'll tone it down a bit.

so... sorry all that kinda stuff.

Theme to be used: the one that is in WWE12

If you fail your tryout match, will you be willing to receive help to improve yourself? yep

Sample Roleplay:not sure what to write here. I'll add it later