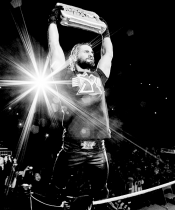 Star-Lord hasn't added any friends yet.

His model looks better than 2K15's.

Not really. Even if it did it's because there's only 2 people on the screen overall.

Dude on UFC his legs are so skinny and his body is huge. I would take his WWE model over the UFC on any day

well, they wanted to stop the boosting because guys were getting 9,999 wins in like a week just to be on the top of the leaderboard. It was ridiculous

Anyone know of a way to boost online just to get the ridiculous trophies out of the way?

Theres no way pal,Unless MAYBE you and a pal set your 1st match choice as diva single. Thats the only thing i can think of

Yea they made online that way to stop the boosting. I would rather have the boosting than this crap tho.

this show was better than most ppvs i've seen all year.

In Topic: What Is Yours