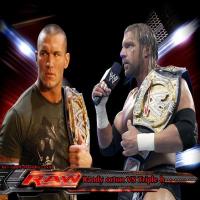 Inception vs. The Dark Knight

Within just the past 5 years, Christopher Nolan proved how good of a director he is with The Dark Knight and Inception. But which is better? I don't even know right now so I will answer later. But what do you think?

What needs to be revived?

THQ has took out many things over the years. So what game/ creation modes do you think needs to be brought back?

So I assume that many of you wrestling fans will be watching the Slammy addition of RAW. But what if we at Smackdown Hotel did our own Slammy Awards? We can pick for Superstar of the Year, the Most Improved Superstar of the Year, ect. We can also do Slammy awards for our own members. There can be a Slammy Award like most loyal Smackdown Hotel member. Or a "Welcome Back!" Slammy. What do you think?

I need help 360 users. I had red rings a while ago and then I got a new XBOX. After that, I tried playing SvR 2010. It didn't work. It said that my downloadable content was missing or damaged and that I had to redownload it to get my data back. I tried it and I failed. I don't have SvR 2011 yet and I want to play with my CAWs and CASs in 2010. Please help! It will be very appreciated!

Star Wars Knights of the Force

I just want to know your opinion on it.