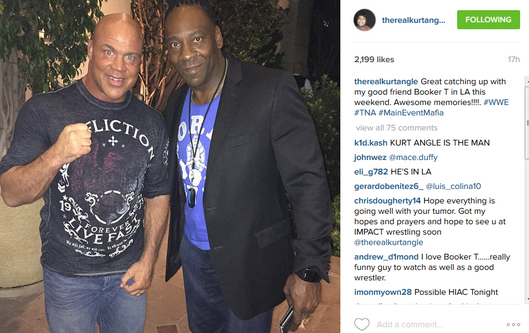 During today’s NXT conference call, Triple H said he’s more than open to speaking to New Japan Pro Wrestling and other promotions to bring talent into NXT as they did with Jushin Liger at NXT Takeover Brooklyn.

Daniel Bryan Says Returning To The Indies Is A Possibility

Daniel Bryan recently spoke with IGN. He say's WWE are now referring him to a third doctor. Daiel says there's a possibility he could go back to the independent scene if his career with WWE ended.

Read some of the comments below:

So, we don't know. I had a concussion in April, and obviously they're very hyper-sensitive about concussion stuff right now. One neurologist who specializes in concussions - who was the neurologist for the Super Bowl last year - cleared me with no limitations. All my testing came back excellent. But the WWE's medical doctor is skeptical, because of my history of concussions and that sort of thing. So they will not clear me. So now, we have two doctors: one saying no, one saying yes. They're going to send me to a third doctor at some point in the near future and that doctor will decide my fate.

Bryan continues, The WWE doctor Joe Maroon is amazing and highly respected in the concussion field, and if they send me to a third neurologist who's also highly respected in the concussion field and they say literally no...well, then is it really smart to go against two doctors? I get all fired up...and then I'm like, maybe that's not the best thing for me and my family going forward.

Would he would work indies if WWE doesn't clear him:

"John Cena and I actually had this discussion. He said, 'if something were to happen to you and the WWE, would you go back to doing the indies?' Absolutely!

Bryan said he's got a fascination with lucha and the idea of doing a mask vs. hair match is appealing to him as is main eventing a CMLL anniversary show.

There has been a lot of talk within WWE about how the NXT (WWE Next) brand will continue to get big exposure and break more barriers, as we go into WrestleMania 32 season and beyond.

NXT is one of if not the hottest thing in pro wrestling today and is still growing at a rapid pace. With that said, it’s expected that NXT will be featured on the WrestleMania 32 pay-per-view with at least a NXT Title match and a strong presence at Axxess, as well as the NXT live event that weekend.

There is also talk of having more NXT Superstars accept John Cena’s United States Title Open Challenges on RAW. The idea is that it will give the NXT talents some mainstream WWE TV exposure.

We noted before that WWE reportedly offered a return deal to former Intercontinental Champion Carlito but he turned it down as the offer was too low. Carlito is still interested in returning if the money is right and mad that clear. There is also still talk within WWE of unmasking Los Matadores and revealing them as The Colons.


In the video above, former WWE developmental manager Kenny "Starmaker" Bolin talks with Bill Apter of 1wrestling.com and says Brock Lesnar "absolutely bullied" him after an OVW live event. Bolin talks about how he did Lesnar's first media appearance when Lesnar came to OVW and they hung out often. Bolin says he thought he and Lesnar were friends but found out otherwise after an OVW live event. Bolin said:

"So the show ends, the fans are out and Brock Lesnar's girlfriend, who he's engaged to, who had been to my house 100 times, who I had hugged 100 times, and who I had kissed on the cheek 100 times. Well this particular night I didn't hug her or kiss her because I was soaked in sweat so bad I wouldn't put anybody through that including my worst enemy. So I did the "Hollywood thing" (motioned a kiss towards her cheeks). Never touched her and it wouldn't have mattered if I did in my eyes. Here comes Brock Lesnar through the door, he's on the ring crew. Brock comes through the door and says, "Get your hands off my woman Bolin." So I'm thinking, "The show is over Brock, no need to carry on anything here." I said, "Oh OK Brock, nothing out of me." Playing along with him for whoever he's trying to entertain.

"He says, "I mean what I say. Get your hands off her you son of a bitch." I looked at him and I said, "Are you serious?" Then he goes on a bit of a cussing rant, telling me what he's going to do to me if I ever touch his wife-to-be again. I said "Number one, I never touched her. Number two, I've kissed your woman on the cheek 100 times before and it never bothered you, what is your problem?" Now he comes over and gets in my face. I'm going, "What the heck is the matter with this guy?" So he's nose to nose with me. He says, "You ever touch her again and I will fucking kill you. I said, "Alright Brock, point made."

"Then his girlfriend says, "Brock leave him alone, he never touched me." He turns to her and says, "Shut up bitch, I ain't talking to you." So now she's hot. He looks at me again and I said, "You're out of line pal. He takes his hand and pie-faces me. The worst thing I did is I didn't go down. It pissed him off that I did not go down. My son loses it. He's going, "Oh God, dad's going to get killed. He runs downstairs, gets Sylvester Terkay, runs him back up. Terkay comes charging in, gets in Brock's face and says, "Hey if you want to fight somebody, why don't you fight somebody your size that's capable of fighting you." He says, "You wanna fight? Fight me." Brock looked at him and walked away. So that's where Brock was then as opposed to where he is now, because now that might be a different story.