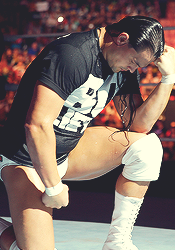 In this game, the user above posts a moment that happened in any wrestling promotion, and the poster below must post what their reaction was as the moment was happening. For example;

Post 1: John Cena winning the WWE WHC at Money In The Bank.

Post 2: I literally threw my TV out of the window.

And it just keeps going on like that. I'll start.

Seth Rollins turning on The Shield.

Inspired by the topic on the FAN forums (http://www.officialf...m/thread/425671), here you can post your favorite WWE (or any other promotion's) match card from over the years.

For some reason, I'm a fan of the classic Photoshopped titles that WWE use.

This Sun., Aug. 18, 2013, WWE will stage its 26th annual SummerSlam pay-per-view (PPV) from the Staples Center, featuring John Cena vs. Daniel Bryan for the WWE championship, CM Punk vs. Brock Lesnar, and much, much more.

The company has an entire slate of events scheduled all throughout the week leading to the big show. A press release was sent out today with a full schedule. Here you go:

STAMFORD, Conn., August 13, 2013 - For the fifth straight year, WWE will entertain the city of Los Angeles with a week-long lineup of events that place an emphasis on community and charitable outreach in celebration of SummerSlam, taking place this Sunday, August 18 live on pay-per-view at 8 p.m. ET from Staples Center. The events begin today and include:

For the first time, WWE will host a press conference to kick off SummerSlam Week. Days before John Cena® defends the WWE Championship against Daniel Bryan®, the two will come face-to-face at The Beverly Hills Hotel. The SummerSlam headliners will be joined by the biggest names in WWE to offer a preview of this year's event. The press conference will also be streamed live on WWE.com, YouTube and Facebook.

WWE and E! Entertainment will host the Superstars for Hope (#STARS4HOPE) red carpet party on Thursday, August 15 at the Beverly Hills Hotel. On July 22, WWE and E! Entertainment launched the first-ever Superstars for Hope fundraising initiative to support Make-A-Wish, featuring chances to win once-in-a-lifetime experiences available to anyone who makes a contribution. For every $10 fans and supporters contribute through fundraising partner Omaze, they will receive five chances to win one of two packages donated by WWE and E!

As part of WWE's partnership with Susan G. Komen, WWE will host mobile mammograms units at select locations where under insured women will be able to receive a mammogram free of charge. On Friday, August 16, WWE Diva LaylaTM and ring announcer Lilian Garcia will take part in a meet and greet at Northgate Gonzalez Grocery store to promote the importance of early detection. The two will be joined by WWE Superstar Alex RileyTM for Sunday's meet and greet at SummerSlam Axxess in Nokia Plaza at LA Live.

Get ready for the ultimate WWE fan experience when SummerSlam Axxess (#AXXESS) takes over the Nokia Plaza at LA Live Saturday, August 17 and Sunday, August 18. This year, the WWE Universe will get unprecedented access to meet their favorite WWE Superstars, Divas and Legends, with more live matches and autograph signings than ever before. WWE Superstar Q & A's and interactive activities will take place all throughout the plaza.

Approximately 40 mom bloggers and their children will be in attendance for a panel discussion with WWE Executive Vice President, Creative and mom of three Stephanie McMahon. WWE Superstars The Miz and Rey Mysterio will be on hand for a meet and greet with the moms and children.

On Sunday, August 18, WWE, Pearson Foundation and We Give Books will host a reading celebration at Nokia Plaza in LA Live during SummerSlam Axxess. WWE Legend Mick FoleyTM and WWE Superstars Cody Rhodes® and Hornswoggle will host local Los Angeles parents and read to hundreds of students to promote the importance of literacy.

A sold out crowd will converge on Staples Center for SummerSlam (#SummerSlam). WWE's biggest event of the summer, which can be seen live on pay-per-view at 8 p.m. ET in more than 100 countries and 20 languages, will feature the highly anticipated match between John Cena and Daniel Bryan for the WWE Championship. WWE is streaming SummerSlam across all Apple, Android and Windows 8 devices and Kindle Fire tablets. The pay-per-view will also be available on Xbox consoles and Samsung Smart TVs, and, for the first time on Sony devices as part of the Sony Entertainment Network.

Is anybody on the SDH going to be going to SummerSlam Axxess?

When UFC President Dana White casually brought up a proposed fight/wrestling match Vince McMahon laid on the table for him some time ago, details were sparse. He was awfully vague about the situation, though he did say Vince wanted to do something in either UFC or WWE.

White was asked about it at the UFC 158 post-fight press conference last night in Montreal and gave this explanation:

That's not saying much we didn't already know, especially the part about Vince being a crazy person who you can never tell where you stand with.

"I said, 'you're crazy. I laughed and said 'you're crazy.' No (I didn't think he was joking). He's a competitive maniac. Maybe (it was personal). Maybe he wanted to kick my ass on national television, I don't know. No, it didn't come out like that, that's not how it was, but you never know with him. When you talk to him, when you sit down and talk to him, you don't know what the fuck, you don't know where you're at or where you stand.

There were rumors at the time that WWE wanted Lesnar for WrestleMania so he could lose to Undertaker, which is why they shot the impromptu angle at UFC 121 immediately after Brock lost the heavyweight championship to Cain Valesques That obviously never came to fruition, much like the proposed meeting between White and McMahon.

And it seems like UFC is pushing a White-McMahon match in the future: 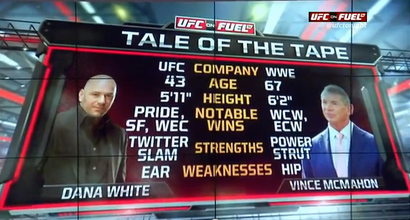 So what do you think? Want to see White vs McMahon at WrestleMania?