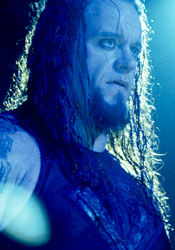 Outcast of humanity Real life heel. Nice to meet ya

All time fave wrestlers:  The Rock, Stone Cold, HHH, HBK, Undertaker, Edge, and many others

The Reason There Was No Gameplay for WWE 2K15?

When Mark Little took over as WWE 2K15’s executive producer, he had one goal in mind: “I wanted to bring the visual intensity people love about the NBA 2K series to the WWE games,” he told Extra Mustard during a recent media event to showcase the upcoming title (October 28 U.S., October 31 worldwide). “With the power of the PlayStation 4 and Xbox One, we are able to bring these characters to life in a way we were just never able to do in previous games.”

Not only did the WWE ship 2K Sports a full-size ring to use for motion-capture sessions (capturing more than five times the animations of any previous game), but 2K utilized the same innovative head and body scan technology featured in their NBA games to help digitize everything from the tattoos on Randy Orton’s arms to the scraggily beard that engulfs Daniel Bryan’s mug.

“One of the things moving to the new hardware affords us is to rethink and retool the game,” says Little. “The entire scanning technology that we used can’t be done for the older consoles. It’s that intense, it’s that complex. What it affords us is the most lifelike images we can get, including signature facial expressions for each superstar.”

“I think all the facial stuff is bad-ass,” says Stone Cold Steve Austin, who appears in 2K15 as one of the game’s legends. “I went down to the studio and there were damn near 100 cameras mounted on these vertical posts, and you went through a range of emotions for them to capture. Now when you punch Stone Cold in the game, you’re going to see just how bad it hurts because I gave them all my pain and angry faces.”

“When I went for my scans, 2K had so much machinery in their studio, it’s like being in the future,” laughs former WWE Champion Daniel Bryan. “I get weirded-out just being around that much technology. I was like, ‘These things won’t give me cancer, right?’

“It’s incredible what they can do now. The detail they capture is amazing. My beard looks perfect in the game. It looks exactly how it does in real life. But they also have small details like the scar on the top of Randy Orton’s head. He has this small little knick, and it’s detailed perfectly. I know when I was playing the game, when I saw the little things like Randy’s scar, when I saw how my beard looked, I was blown away.”

To get Bryan’s beard exact, Little says that they actually needed to move beyond scans and experiment with what he calls “all new beard tech.”

“Scanning doesn’t do beards or hair well, so for guys like Daniel Bryan, we needed to use this new beard tech to get him just right,” explains Little. “There is this specific code of technology that we use to get the beards just right, and no beard is alike. Daniel Bryan’s is more open and scraggily, where if you look at a guy like Mark Henry, he has a big beard, but it’s thick and solid. We had to create technology to be able to capture both in a way that not only looked great still, but animated.”

Wrestling icon Sting was also scanned for the game in full Crow-like costume and face paint, as WWE 2K15 marks his first appearance ever in a WWE video game.

“They got me from head to toe, every detail down to the way I furrow my eyebrows,” says Sting. “I’ve seen myself in a lot of video games, but this is the best quality I’ve ever seen.”

The characters look so real, in fact, during one gameplay session, Randy Orton slapped John Cena across the face then even flashed his signature, sinister smirk, showing off that emotion that until this point, has been so elusive in previous WWE games.

“2K is much more devoted to giving the graphics a boost,” says Cena. “I’m weird about little stuff when it comes to video games, and I love looking at the crowd in games. In this game, when you look out into the crowd, you see all the signs, all the junk that’s on the signs, and it’s just so authentic on every level.

“But when it comes down to it, not only does the game look better, but the gameplay is better. Now when you play through your career, you start in the performance center and try to work your way up to the Hall of Fame. There is a rivalry mode where you can relive my rivalry with CM Punk or play through all of the great matches between Triple H and Shawn Michaels, and the video packages included and everything surrounding these rivalries is just amazing.”

Adds Little: “This is the first time where you’re looking at the game on screen and you can easily be fooled into thinking you’re watching an episode of Raw … the game looks that good, especially when John Cena is giving you that trademark glare from across the ring. You know by the way he’s looking, business is about to pick up.”

Notes and quotes from the WWE 2K15 premiere event in L.A.:

John Cena on his rivalry with CM Punk: “That was a time when I was viewed as the establishment, then along comes the anti-establishment. We went back and forth for a little bit with a lot of great moments, a lot of great matches, and it was good enough to make the WWE 2K15 rivalries, so now people can try to relive it. Any time we squared off, whether it was physically or verbally, it was something people wanted to see.”

Cena on CM Punk leaving the company: “To me it’s always heartbreaking when someone leaves, no matter what the reason is they are leaving for. I love the business, and I see, even if people aren’t cut out for this, I see the gleam in their eyes once they get the chance to get out in that ring. Whether it’s Punk or anybody else, it’s always a shame when anybody has to go.”

Sting on his plans to wrestle in WWE: “I’m thinking about having one last match, but I’m open for more. I’m open to seeing how things go, how my body feels after the one match. I’d love to wrestle The Undertaker, but I’m not sure what his status is or if he’ll come back. I think he will, but if he doesn’t I’d love to wrestle somebody else from my era, and I think one of those dream matches is against Triple H.”

Cena on Sting: “I want to see Sting in the WWE ring for real. I’m like everybody else, this is too good not to happen. This can’t not happen. Selfishly, I’d love to step in there against him. I hope it can happen before he graciously decides to not be active in the ring. I just want to see him have a match in WWE.”

Stephanie McMahon on Sting wrestling in WWE: “I’ve always wanted to see Sting in a WWE ring, and now with WWE 2K15, I can absolutely see him in video game form, and hopefully moving forward, it will extend beyond that.”

Also, there is a pic of Sting being scanned.

Hulk Hogan appeared at last night's WWE live event in San Jose to promote WrestleMania 31, the WWE Network and WWE 2K15. Hogan told fans in the crowd that he has one more match left in him and that we should expect to see him back in a WWE ring real soon.

Hogan is also possible for an appearance at the SummerSlam pay-per-view tonight. Hogan left last night's live event and was rushed back to Los Angeles with the rest of the crew to prepare for tonight's event. Unless he was possibly appearing at SummerSlam or Monday's RAW, Hogan likely would have just flown home to Tampa.