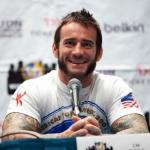 It's a long story, cut short born and raised in Derbyshire England. One day at age 8 I was sitting at the TV when my brother and his older mates walked in. They chanted things such as "Hello Ladies" and "If ya smelllll" all the way too "And that's the bottom line". They changed the channel to about 30 men in a ring brawling it out, each cheering and booing a different person to the other. And so I joined in, I liked the big red one but he disappeared after going over the top rope and I remember seeing a bald redneck raise his fingers at the crowd as glass shattered. From then on I was hooked. At age 19 and now living in Melbourne, Australia with my gorgeous girlfriend I am still an avid wrestling fan. It was a huge part of my childhood and I cannot imagine live without it. It is a passion and a hobby and will be till the day I die. I love wrestling every aspect too it cause when wrestling gets it right its magic! And I have grown up watching the magic supporting it from the darkest days to the highest peaks. I'm not a fan, I'm someone that's part of something bigger then that. Wrestling is and will forever be in my eyes exactly what it is promoted to be, a spectacle!

In Topic: THE WRESTLING BIBLE!

i will give you one for each

Face/Heel/Tweener: depends on if your are a WWE fan or TNA fan

other notes: wwe vs tna,5 vs 5 main event at survivor Series

This will take me a good while but it will be done.

In Topic: Life Beyond Our Planet

I believe there are others out there, but not as evolved as our race.

OOC- I'm controlling all the Wyatts.

OOC: ah....just to hurry this storyline when i'm offline you can have Bryan untill i am back online

OOC- I'm controlling all the Wyatts.

The lights in Bryan's lockeroom are all out as "Broken out in Love" plays from the room.