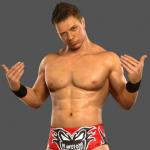 Ok, so if anyone did want this, I kept messing around in Create-an-Entrance and found that current Chris Jericho's intro motion is a perfect fit. If you use that Barrett will put his arms up right at the "Boom." Hope this can help some of you.

Yeah that's what most people have, but for some reason it doesn't appear. Thanks anyway. If anyone else knows, please share. I would love to use a custom playlist.

One thing I know for a fact is they fixed the Internet Championship call name. It no longer says the WWE Championship. It now says Internet. And I believe some music in create-an-entrance that wasn't showing up before is now there. That's all I heard.

I found one on Xbox. It'epic. What I really need though is a good Big O CAW if anyone has one.

how did he have no titantron then a titantron?