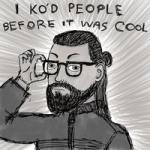 Come on now, Ron. I know you're a cool guy, but this is taking it a bit far. Unfortunately, all I've seen you do is ask for a match with Seme, and go on about RCW. I can only think once where you came into our chatbox and not advertise, and just wanted a straight up match. You said EWE are scared of competition? If anything, as Chris said, we're aligning ourselves with other leagues. Some of us has jumped to NGC, some of us are in ROV. I wouldn't say that's scared, but just opening up to more opportunities to play with like-minded people. Now, I haven't played you in a singles match, so I can't judge how you work a match, but I know for sure when I played ChuckNasty or Nic, they can pull off one hell of a match as I'm sure they can with others, but hell, that's just my personal opinion.

"Its like yall at EWE are scared of competition honestly.. When in all actuality all the videos are just great editing.. Im talking about ring work.. Ring Psycology... actual storytelling. without the high treble voices. That what my style is based on. Im actually trying to duplicate what we see on TV each week. Maybe not with all the bells and whistles of sony vegas and photoshop but we focus on the basics."

I'm sorry, but it seems like you're taking a shot at me when you say that, since I'm part of the promotion. The people in EWE do watch wrestling videos, and we do analyse how a match is worked, so it can be replicated in a match on WWE 13. To say our work is edited is just absurd and ignorant. That's like saying we're just throwing stuff together and splicing it up post-match to produce on YouTube.

Come on Ron, I know you're better than this. If you're willing to talk in private, feel free to hit me up.

In Topic: What is a good match in your eyes?

A good match, in my experience of playing and in my opinion, is when two players know how to wrestle. What makes an even better match, is players that have a sense of ring psychology and can play their gimmick down to a tee. With competitive matches, it's just repetitive stuff, mixed in with taunts to make it look cool. When you're actually wrestling, I feel that creativity becomes unlimited, and therefore, the possibilities are endless. Just watch matches, try and replicate some of their stuff, then you pick up these little things that can truly make yourself a performer. People watch wrestling matches to see a story unfold, and I just feel that competitive matches just defies that purpose.

I was fascinated by your work, so I just had to give you some more people to work with. I'm sure you can come up with something good

I really enjoyed reading that. Hopefully I can put it all into action, but seriously... Amazing stuff. Thanks!