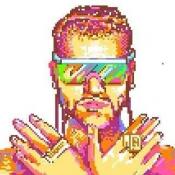 Hey, are you the Guitar that used to be on caws and got lolbant? I remember someone who was kinda similar to you. :D