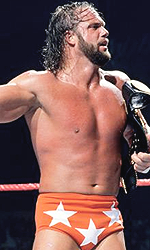 The Chaos hasn't added any friends yet.

So Ryback announced in an interview that he will be doing another open challenge at Survivor Series.Now bearing in mind that he'll most likely just do a squash match against someone unimportant, I have two theories for who he could be facing if otherwise.

So first off let me just premise that these are not facts nor rumours, just theories. Now my first person is the more obvious of the two, Goldberg. With Survivor Series being a very lackluster show and WWE being quite boring as of late, how about a massive return? It would also make sense due to all the rumours and whatnot, as well the crowd will probably be chanting Goldberg anyway before he even comes out. So he is my first pick for a possible return.

My second pick (and God I hope this does not happen) is "The Beast...BRAAAAACCCCKKKK LEEESNAAAR!"...or Brock Lesnar for short. Now to me this may be the more likely of the two, for a few reasons. One, it was only recently that rumours surfaced stating that WWE Officials were looking to set up a Ryback vs Brock Lesnar feud, so this would be a way to start. Furthermore it would tie in with the storyline as Ryback denounced him self as a Paul Heyman guy and insulted Heyman which could be the reason behind his return.

Either one probably won't happen but if they do, it will no doubt be a squash match either way. I kinda hope it is one of them (Goldberg more so) as it would spice up what looks to be a rather boring PPV.

So I remember with both 13 and 12 you could add custom entrance videos into the game and I was wondering if it is possible with 2K14 and how?

So to premise, this list is a list based on personal opinion. None of it is factual and may not even be logical, however baring that in mind, these are my top 8 picks for next years Royal Rumble winner:

Now this is highly unlikely however I had to include him as I am such a huge fan of this guy and I can only hope that he gets an opportunity like this, and this is why. His microphone skills are on par with just about everyone in the business today. Whenever he cuts a promo you are just drawn into what he says and he can turn a simple wrestling match into an enthralling story before the match has even happened. Although some say he is not skilled in the ring, I would disagree as he sells great for a large guy and he can put on entertaining matches. The chances of this happening is incredibly small however one can only hope

Before Ryback turned heel many months ago, many would put Ryback higher on this list, and so would I, however since then the booking for Ryback has been horrendous and he has been on a degrading losing streak through his different feuds with wrestlers like CM Punk and Cena. Furthermore there has been talk that officials backstage are not too high on Ryback due to his in ring performance and interviews. However this does not entirely take him out of the picture for the Royal Rumble however if it ever does happen, it’s more likely it could happen next year.

Picture this – John Cena elevated into the air in slow motion, as he slowly descends he is met with a powerful European uppercut to the face. Antonio Cesaro personifies greatness, his in ring skill is just superb and his strength pound for pound is immense. However he is yet to have a singles run that I have enjoyed. I am enjoying his time in The Real Americans and I feel he is ready to be elevated. Hell he has praise from Superman himself, John Cena. If booked right, he could be a top face in the WWE and a great world champion, he just needs the push.

WWE are extremely high on Roman and with good reason. I mean sure he’s no CM Punk or Ambrose when it comes to talking on the microphone however he has improved  immensely since his debut and could definitely hold his own promo. Ever since I saw the photo posted by WWE where Reigns is holding the WWE Championship I have been very excited to see where his career goes. Although some may say it is too soon to have him win something this big, it still very possible.

He is the best in the world at what he does. He has achieved just about everything there is to achieve in his career, however one thing he has not done, is win the Royal Rumble. As much as I love the fact that he does this, I hate seeing him constantly return just to put someone over. Even Chris said himself that he does not make the decision to put people over and lose, he just does what the boss tells him to do and I think he deserves a winning run. Now he has stated that the reason he does not push for title runs and whatnot is because he cannot stay long enough to have a successful run due to touring and whatnot, however if you have him return in time for the rumble you can still have him win it and then lose at Mania or Payback. As a Chris Jericho fan for both the wrestler and the person, I would be gleaming with happiness to see him standing triumphant as the last man standing at the end of the rumble.

Mentioning Ziggler in this list let alone at number three is being very hopeful when you look at how he has been booked as of late, however it is not unrealistic. It was not long ago that Ziggler was one of the most over guys in the company after turning face. Now I am not too up to date on the whole “punishment” situation but if I was looking at the product from a casual viewers standpoint, Ziggler winning the Rumble would be one hell of a surprise. Ziggler could have another chance at a successful WHC run, except this time round he should probably where a helmet of some sort when in matches…especially with Swagger.

“YES! YES! YES!” said the crowd as Big Show stands in the spot that was formally Bryans. Many are disappointed with the way both Show and Bryan have been booked with many believing that Bryan should still be in either the title mix or the feud with Triple H and also wanting to see Big Show out of the title mix, maybe facing Triple H or Kane, however that’s how they have been booked and none of us can do a thing about it. However that does not mean there is no hope for the bearded warrior. For the past few months he has been the main face of the company going up against Randy Orton and he definitely showed us that although he is no Cena, he can definitely hold his own as a top baby face alongside CM Punk when Cena needs some time off. However Bryan being the winner can be seen as somewhat unlikely as rumours tell us Bryan is being blamed for the bad business in the last few months, it was absolutely nothing to do with the somewhat lacklustre booking (!)

Now this being a list formed on partly personal opinion, this pick is of the utmost bias. I have been an enormous fan of Punk since his ECW debut and have stayed a fan through everyone calling me a mark, so of course I would die with happiness to see Punk win it, but it’s not as if this pick is at all illogical. I mean for one he is one of the people currently rumoured to win the rumble, and rightly so. He is one of the biggest stars in the company right now that the fans have not gotten sick off like Cena and Orton.  He held the WWE title for 434 days, he went toe to toe with The Undertaker on the grandest stage of them all and by God he was the referee when Mick Foley finally beat Chris Jericho at the Hall of Fame ceremony. Unlike Chris Jericho  he has won the Money in the Bank, twice! He’s done everything possible to help cement his legacy as the best in the world, except one thing. Actually maybe two things, he has never won the Royal Rumble nor has he main evented Wresltemania, however this may be the time for this to happen.

"The Chaos Says" My Wrestling Blog

To start of I know promoting yourself is unpopular on forums however I am just linking my blog as I love to write about things I love and would love to hear peoples feedback on what I write. I do not earn any money from this, I just wanna get my blog out there so people can read it. I have posted my first topic which is about the possible Survivor Series match as well as future feuds. I enjoyed writing it and I hope it is a good read. Thanks for reading this thread, I apologise if people see this as a pointless thread.

Here is my blog: http://thechaossays.blogspot.co.uk/

Modern day SES and NWO for my Universe Mode

So I am currently planning my Universe mode for when I get back home. I am planning on having 1 Major Heel Faction on both Raw and SD. These will be NWO and SES.

So I was wondering what superstars you guys think I should use for these factions from 2K14 in my Universe Mode, these are what I have so far but I am unsure: