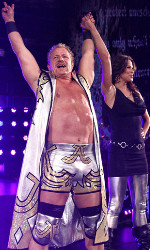 The shows of FNWZ will be placed here.

A Voice booms across the FNWZ arena 'Ladies and Gentlemen, welcome to the inaugural Friday Night War Zone! This opening contest is scheduled for one fall, and, as per the stipulation decided by our General Manager, is a No Holds Barred, Tag Team Match!'

Ambrose and Light start this match off with a lock up in the center of the ring. Ambrose takes control, and throws Light aside with a simple hip toss. Ambrose is already rubbing his hands, perhaps in anticipation of the impending presence of Mick Foley, and gives a sickening smile towards them. Light charges towards Ambrose, who sidesteps, leaving Light leaning on the turnbuckle. Ambrose hits a snap suplex from the corner and goes for the pin, 1...2... No, a close 2 on the pinfall. He tags in Mcintyre, who immediately grabs Light and sets him up for a Future Shock DDT. Mcintyre goes for the drop... No! Light grabs his legs... He's going for the submission maneuver he calls Sunrise! He's got it locked in! Mcintyre is on the verge of tapping out, but Ambrose breaks it up and hits a Headlock Driver on Light! Ambrose and Mcintyre begin beating Light down! Foley climbs into the ring to try and help Light, but gets caught with a dropkick from Ambrose! He falls out of the ring, leaving Light to a merciless beatdown from both Ambrose and Mcintyre! Foley climbs back into the ring with a steel chair in hand, and smashes it onto Mcintyre's back! Mcintyre is down! And now the match has descended into chaos! Foley throws Ambrose outside of the ring before trying for the tag, and he gets it! Foley grabs Mcintyre and the chair... an underhook DDT from Foley, onto the chair! Mcintyre is out! It's elementary! He goes for the cover, 1... 2... 3! Foley and Light get the win, Mcintyre is covered in blood; he must have been devastated by the DDT! Light and Foley celebrate... Wait! Ambrose is behind Foley! A HUGE Low Blow! Foley is down! Light runs Ambrose out of the ring before helping Foley up.

Rickert and Alexander are in the ring, having entered beforehand, and are eagerly awaiting Sampson's arrival into the ring. His theme music hits, and Sampson comes running straight to the ring. The Cell door is locked, but Rickert and Alexander instantly go for Sampson! They're aiming for his face, the part of his body that he supposedly values the most! Sampson is putting up his arms in defense, although it seems futile right now! Rickert signals towards a chair, and Alexander heads over to pick it up. He unfolds it and puts it in the center of the ring, before taking Sampson and hoisting him up... Cradle DDT, that collapsed the chair! Alexander goes for the pinfall, but Rickert is shouting something! It looks like they can't agree on who should win! Perhaps Sampson was right! It doesn't matter now, though, as he's out on the canvas! Rickert and Alexander are arguing over who should pin him! Wait, AJ Lee and Kaitlyn are heading towards the ring! They're shouting to their boyfriends to give each other the fall! Wait, Sampson is back up! He's busted open from the repeated shots to the head! He's heading to the top rope, AJ and Kaitlyn are pointing! Rickert and Alexander turn around in unison, and Sampson hits them with a double flying clothesline! All 3 men are down on the canvas! Rickert's up! Koji Clutch on Sampson! He's got it locked in! Sampson's trying to escape! He's trying to wriggle out of it... and he manages to alleviate some of the pressure! He swings a fist and catches Rickert on the chin! The hold's broken, and Sampson staggers to his feet, before delivering a vicious boot to the face of a sitting up Rickert. Alexander is getting back to his feet, but Sampson's got him in his sights! He hurls him out of the ring, before running back against the ropes... He dives through the rope and rams Alexander into the chain! Alexander slumps into a heap on the floor! Sampson rolls back into the ring, and hauls Rickert onto the top turnbuckle. He climbs up, before leaping onto Rickert's shoulders... Hurricanrana from the top rope! Rickert is down... Sampson grabs Rickert's head... he kicks Rickert square in the temple! He's got his neck, and there's the Unparalleled Beauty Submission! Alexander is sliding into the ring, but Rickert is on the verge of tapping... Alexander breaks it up! He stamps on Sampson's face! Sampson is down, clutching at his face! Alexander goes for the pin but is distracted by Rickert! They're trying to settle on a winner... It looks like Rickert is going to take the pin! They both turn the other way, but Sampson is there with a roll up! Alexander turns around, but the referee counts 1...2...3! Sampson took the cheap way out and is your new Continental Champion!

Note: This is the match that BB hinted towards the result; I'm not trying to be biased, I can show you why I think this is the result he wanted if you want to see it.

A voice once again booms throughout the arena 'Due to unforeseen circumstances, Daniel Bryan is unable to compete tonight. Therefore, this contest will occur next week, on Friday Night War Zone! But now, it's time for the main event of the evening'

Jericho and Punk lock up, and Punk gets the advantage. Jericho transitions into a headlock and lands a hip toss, but Punk gets right back up. Jericho grabs Punk and whips him against the ropes, and hits a dropkick, dropping Punk to the canvas. Punk gets back up and hits a knife edge chop onto Jericho's chest. Jericho clutches his chest in pain, before Punk grabs Jericho into a snapmare headlock. Jericho is struggling to escape! He elbows Punk on the chin. And again, Punk breaks the hold. Jericho gets back to his feet, and hits a flying forearm off the rope rebound, Punk is down. Jericho goes for the pin, 1... Only a one count. Punk climbs to a vertical base. Jericho runs at Punk, but runs into a spin kick. Punk whips Jericho against the rope, and hits a jumping heel kick, and another! He goes for the arm trap neckbreaker, and he hits it! He goes for the pin, but only gets a one count. Punk throws Jericho into the turnbuckle... and hits the running high knee, followed with a clothesline. He mounts the top turnbuckle, and goes for his Elbow Drop... He nails it, right on the chest! Jericho slowly gets back to his feet, to meet with a grinning CM Punk. Punk picks him up onto his shoulders, looking for the Go To Sleep... No! Jericho slides off of Punk's shoulders, and grabs Punk's legs... The Walls, He's going for the Walls of Jericho! Punk flips Jericho away, and gets back to his feet. Punk throws Jericho back into the turnbuckle, and goes for a second high knee. He hangs on the turnbuckle for a second, but Jericho grabs Punk! Powerbomb! He goes for the cover, 1...2... a 2 and a half count for Jericho! Punk is still down, he's clutching his abdomen, that powerbomb must have hurt him a lot more than it seemed. Jericho runs towards the ropes, and there's the Lionsault! He goes for the cover again, 1..2.. Only a fraction away from the three count! Jericho punches the canvas in frustration. He picks Punk up, and slaps him! Punk must be out on his feet by this point! Jericho grabs Punk's legs, and he's looking for the Walls again! Jericho gets the Walls locked in. The referee looks concerned about Punk, he's checking for any sign of consciousness... He lifts the arm once, twice, no response... third time... Punk holds it up! Punk is struggling to break the Walls, Jericho is wrenching right back! The amount of pressure on Punk's spine and back must be tremendous! Jericho eases up on the Walls, and grabs Punk's arm. Jericho pulls Punk's arm, but Punk locks in the Anaconda Vise! Punk was playing possum! Jericho is in the Vise! He's wriggling about in an attempt to get out of the Vise! Jericho's crying out in agony! He manages to find the strength to punch Punk in his abdomen, which was injured earlier! Punk lets Jericho out of the Vise, and clutches his abdomen. Jericho grabs Punk's left leg, and locks in a modified Walls of Jericho, using all of his strength on Punk's left leg! Punk's had enough! He taps out! Jericho is your new World Champion! He grabs the title and mounts a turnbuckle, celebrating with the gold!

Winner via Submission through the Walls of Jericho and NEW FNWZ World Heavyweight Champion: Chris Jericho

So, how do you think I did? Please answer these questions if you're going to post:

1) Thoughts on the show

2) Thoughts/suggestions on my style of writing?

3) How do you think the Tag Team & Women's championships should be put on the line?

I figured that I wanted to share some of my Superstar Threads with you. These will be Threads from WWE TV as well as custom threads and retro threads. Hope you enjoy

Spoiler
ATTIRE: Either, depends on your preference of Orton's face

Edge Black/Red (I used 1st 2 pics for this, first on for tights and second for kickpads)

ENTRANCE ATTIRE (Loosely based on original, changed due to attire constraints)

Cheers guys, and if you have any requests, please post below with a picture of the attire

Hey, I'm MrInferno. Full time wrasslin' fan for about 2-3 years now, although I've been watching wrestling since around 2006, when I would watch TNA during my holidays (I didn't know where I could get WWE on TV back then, but TNA was on channels that I watched lots). I've been dwelling here for a bit now, not signing up but looking around and I finally decided to say hello. The community seems nice to me and I figured that it's time for me to get involved. So, hello!

I'm from London in the U.K, so I don't tend to watch anything live, especially since I need my beauty sleep

Cheers for reading, hopefully we can get along just fine!

P.S Forgot to say, congratulations for partnering with WWE!