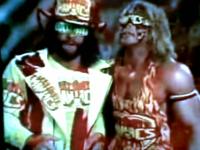 I'd like to see the Golden era 80's/early 90's with Hogan,Savage,Ultimate warrior..

But i think two separate games would be the better.One with the entire current roster that all of you are been demanding and another one(or some kind of DLC) with oldschool theme,
It would be the right way to make happy the different generations of WWE games fans.
Some people use to talk about Legends of Wrestlemania,but that game was another type of gameplay(really sucks!) which ruined the experience.
The older fans like me, deserves a good simulation game like all of you,We 've been buying the WWE products since the 80's ,that's why they usually include the Legends,there's a real oldschool demand even when some people doesn't understand and say Legends are a waste of space...
That's why i 'd like to see 2 separate games ,to make everyone happy.

Yeah!That would be the dream of many old school fans who are been playing this franchise along these years...i know a few of them:)

Ok.Sorry guys:)Personally it´s not my case.The Legends and create an arena are the top reasons to me to buy the game.I´m a old school wrestling fan and i don´t care at all a big part of the roster,Divas and current superstars...Only a few of them.But i can understand everybody at all

what I mean is there are so many main eventers with all these legends added in that I don't know what to do with them half the time...

Don´t you know what to do with main eventers and Legends?This it´s wrestling!and what do you do with Divas¿?´Oh my God!Give me a great main eventers and magic characters like Savage or Warrior and i´ll give to you all my WWE 12 Divas

Personally i don´t care about Divas.I can understand many people wants a bigger Divas roster,but of the 14 DLC =6 or 7 more Divas i think it´s a good number...Personally i´d love to see 6 more Legends or guys like Lesnar or Goldberg and i don´t cry everyday for it.

This year it seems THQ has been working so hard to satisfied everybody.Please let´s stop to cry