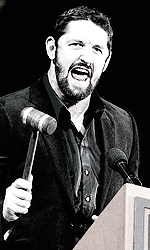 While yes I'm a huge fan of him, Tupac is massivly overrated, he rapped about stuff he never did.Tupac if he deserved any award , was that in  the course of his career, he never let go of his acting role in Juice and lp after lp, he was perfect in  that role until he actually became that psycho bi-polar crazy guy named Bishop. If anything, he should have been nominated for a new type of Oscar,thats what he did he was more of a actor than a rapper. To me I looked at Pac more like a Poet, and he was a damn good one,but the fact that he is on many peoples top 10 list is crazy, Im a big fan of him not because of his lyrics or nothing,but because of his messages he brings accross, as a fan I can honestly say hes overrated.

In Topic: Tips on rapping

Alright first of all, dont listen to people who says guys like Hopsin, Hopsin is not a MC he is a rapper.Look up guys who have proven their self in the game. For starters, check this book out it could help you alot. Also try and listen to some of the all time greats. Ill give you a list of my top 10 and you listen to their flow, and their lyrics, and see what you can make out of them, they are in my eyes pioneers of the game

Study these guys and you it could inspire you, also check out the book I linked you to, I hope this helps, and best of luck to you.

Thanks I apprecaite that, yeah I really just like to keep my avys easy and clean if you know what I mean.

Thanks whats your fav piece of work.

Thanks man appreicate it.

Thanks whats your fav piece of work.